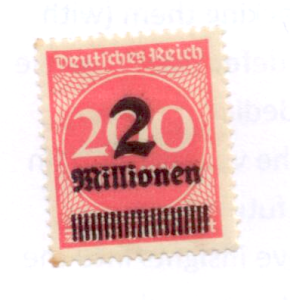 Sometimes a picture replaces a thousand words. This German 2 million mark stamp  from 1923 in Germany reminds us that even in an advanced western country less than a hundred years ago people lived through a dreadful hyperinflation.  By the peak of the price rises in November 1923 the authorities decided to remove 12 zeros from their currency, creating a new or Rentenmark.  In August 1924 the new Reichsmark replaced 1 trillion of the old marks.

The fear of inflation has haunted Germany ever since. It lies behind German current reluctance to print too many Euros to deal with the probpems of state and bank debts in parts of the Eurozone.  Germany knows from bitter experience that if you print too many to get round the problem of managing your debts and deficit you can trigger a collapse of confidence in your currency, a rapid move in to goods, and eventually a hyperinflation.

Creating a new currency that might be more stable and which people trust is the easy bit of recovering from such a situation. The hard bit is the deep recession or deflation that can follow the bursting of the bubble and the creation of the new stronger currency.

The Euro area does not today stand on the edge of too rapid an inflation – far from it. The main safeguard against printing too many  Euros  to try to stave off the day when state and bank debts have to be paid is the attitude of Germany herself. That image of the overprinted postage stamp is a timely reminder to Germany and the architects of the Euro that there is no easy way out of excessive state and bank debts or large deficits. If you try too hard to inflate your way out of your debts, you can end up with a worse crisis.